Why I Ride with Waymo: Jordan 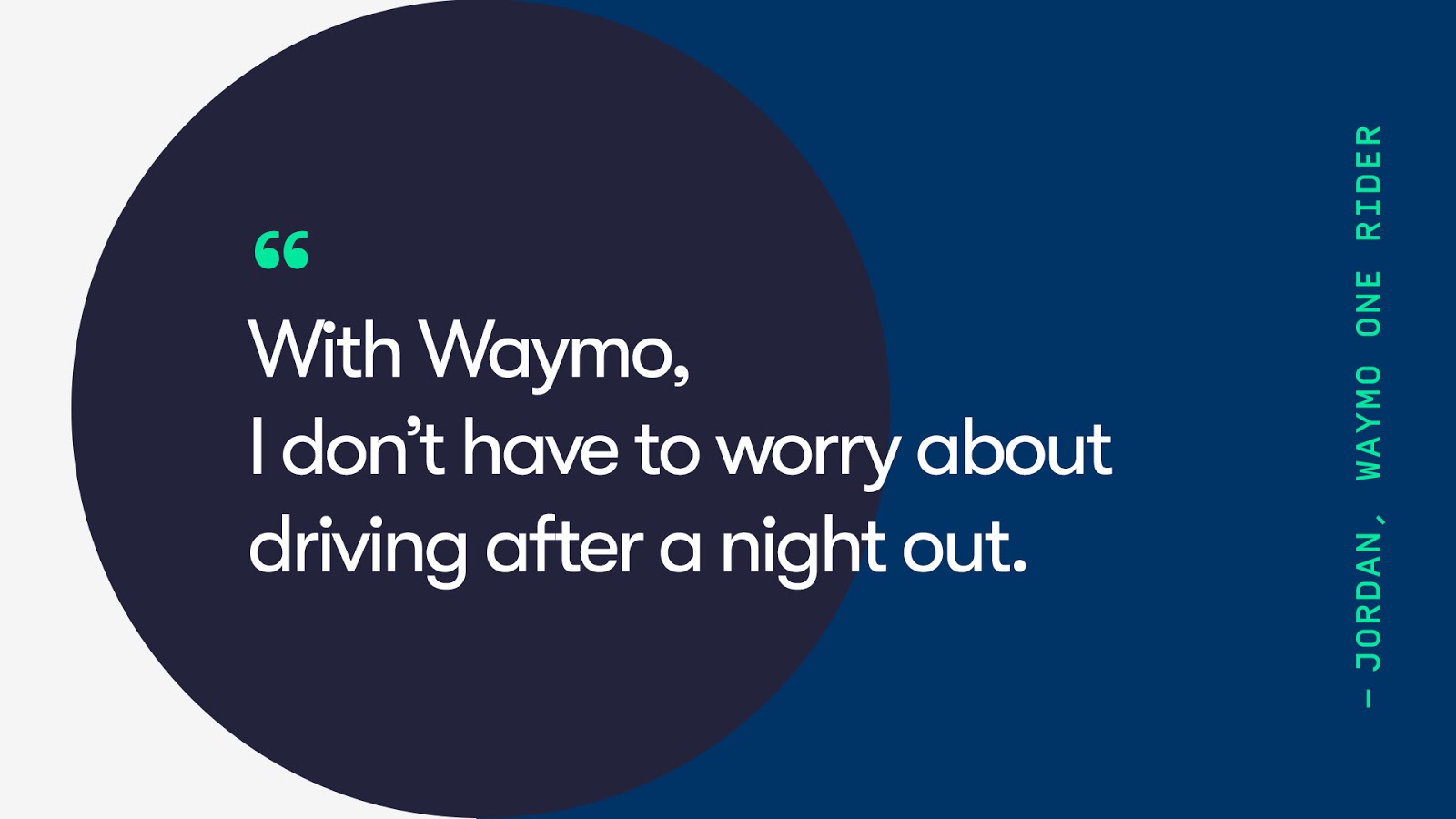 Editor’s Note: In this “Why I Ride with Waymo” post, Jordan shares what makes Waymo One a relaxing and enjoyable service.

Tell us a little about yourself!
Hi! My name is Jordan, and I work at a software company in Chandler, Arizona, doing phone tech support.

What do you primarily use Waymo One for?

I primarily use Waymo to go hangout or go to bars with my coworkers. With Waymo, I don’t have to worry about driving after a night out; plus, I get to keep my car in the prime apartment parking spot.

What was your first ride like, and what has improved since then?

I was nervous for my first ride, but now, I just call for a Waymo vehicle like I would any other ride-sharing service. Since I started riding, I’ve noticed the car’s interface is more intuitive, and the cars now lets you play music so you don’t have to ride in silence.

How do you normally rate your Waymo One rides?

I normally rate my Waymo ride as four stars, or greater, unless the car does something it doesn’t usually do, – when it does, I’ll report it in the app.

What’s the most difficult part of driving for you, and how does Waymo handle it?

The most difficult part of driving is reacting to others on the road, and Waymo is usually rather overly cautious, which is a good thing.
Why do you like riding with Waymo?
Waymo is competitively priced, and you don’t have to tip the car. I also appreciate that I don’t have to talk to the person behind the wheel; it makes the ride super pleasant so I can sit back, relax, and use my phone.

Waymo’s Chief Product Officer Dan Chu reflects on the recent attacks on the Asian community. Learn more about the recent Anti-Asian attacks that have occurred in the SF Bay Area: https://www.kqed.org/news/11859965/700-anti-asian-hate-incidents-reported-in-bay-area-during-pandemic-true-figures-might-be-even-worse

Final boss form for the Waymo Driver? A world without mobility limitations. A world where everything is possible.

A little BTS from our #WaymoVia team during closed course testing 🤖🚚 🛫

Thank you to @RedCross for the work it's doing on the ground in Texas and beyond to keep people safe. We are proud to make a donation on behalf of @Waymo. If you are able to help, please visit http://www.redcross.org/donate/

We love a first-of-its-kind autonomous navigation moment. Congrats to everyone @NASAJPL for landing safely on the surface of Mars!

I’m safe on Mars. Perseverance will get you anywhere.

#AutonomousDrivingTechnology "could radically change the abilities of people with disabilities to have the autonomy to live the lives that they want to live.” - Andrew Maynard @2020science. Read more in @phoenixmagazine: https://bit.ly/3jW4JkI @seeitourway @waymo

As we continue to develop our fully autonomous driving technology, we’re expanding our testing efforts in San Francisco to better understand the unique challenges of urban driving. https://blog.waymo.com/2021/02/expanding-our-testing-in-san-francisco.html

How do we approach the legal complexities involved with innovative technology and unexplored legal topics? Our Chief Legal Officer Kevin Vosen recently spoke with @thisisinsider’s @mattdebord to discuss how our legal team approaches their work. https://www.businessinsider.com/waymos-top-lawyer-explains-how-its-expanding-its-reach-2021-2