Why I Ride with Waymo: Jesse 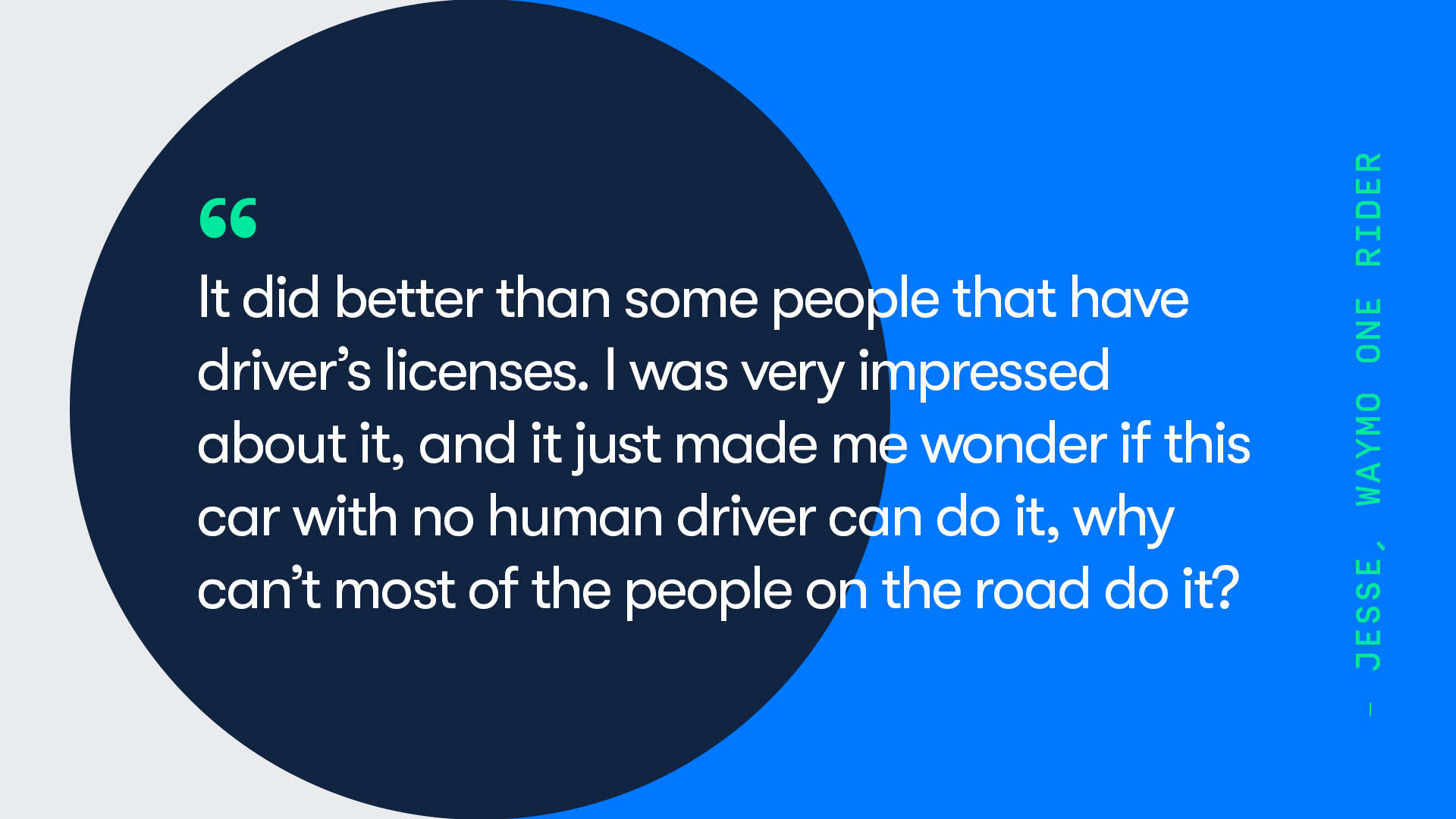 Editor’s note: We love seeing our Waymo One riders share their experience with the world. After catching this video of one of Jesse’s recent rides, we reached out to him to get more info on how it went. In the Phoenix area and want to experience a fully autonomous ride for yourself? Just download the Waymo app and hail one instantly!

Tell us a little bit about yourself!
I’m Jesse, and live in Tempe, Arizona. I love traveling and trying new things out; I’m originally from Charlotte, North Carolina and recently moved to Phoenix with American Airlines.

How did you hear about Waymo One?

I heard about Waymo from my roommate. He told me it was something I might like so I downloaded the app and called a car right away to see it for myself.

What was your first fully autonomous ride like? When did it start to feel like a normal part of your daily life?

My first fully autonomous ride was the very first ride I booked with Waymo. I thought it was very fun, and I smiled the whole time calling all my friends on FaceTime. I didn’t want to get out – I was having so much fun!

What do you primarily use Waymo One for?

I primarily use Waymo to get around and go to Walmart mostly. I just moved here, and most ride-hailing companies are expensive, but Waymo always has the best prices. The cars are also always clean and ready for me when they pull up.

What’s the most interesting thing that’s happened to you while riding with the Waymo Driver?

In the Waymo ride I just took, there was a bus that pulled over in front of us, and the car read that and knew when it was safe to go around. It did better than some people that have driver’s licenses. I was very impressed about it, and it just made me wonder if this car with no human driver can do it, why can’t most of the people on the road do it?

What would you say to people who might be hesitant to get in a car with no human driver?

Most people would be hesitant to get in a car when there is no one in the front seat, I’m not! And most people that commented on my Facebook video stated that they would be scared or would never do that, but I had a great experience and would hop in a Waymo ride before using any other service.

A lot of good can happen from public and private partnerships. Proud to see @CityofPhoenixAZ get recognition for their leadership in pursuit of innovation! https://www.businessinsider.com/us-cities-paving-future-investing-tech-sustainability-infrastructure-innovation-2021-3#phoenix-arizona-7

Let’s be blunt: This was a real journey for @M_J_Charnock and for us.

The fleet of autonomous cars will someday take passengers. https://thebolditalic.com/waymos-robo-taxis-launch-on-san-francisco-streets-i-did-a-virtual-test-drive-4ba7aa205053

Congratulations to Waymo’s CPO Dan Chu for being named one of @svbizjournal’s C-Suite Award honorees for 2021! Read more about how he’s approached work and family life over the last year. https://www.bizjournals.com/sanjose/news/2021/02/25/svbj-csuite-awards-2021-dan-chu-waymo.html

Waymo’s Chief Product Officer Dan Chu reflects on the recent attacks on the Asian community. Learn more about the recent Anti-Asian attacks that have occurred in the SF Bay Area: https://www.kqed.org/news/11859965/700-anti-asian-hate-incidents-reported-in-bay-area-during-pandemic-true-figures-might-be-even-worse

Final boss form for the Waymo Driver? A world without mobility limitations. A world where everything is possible.

A little BTS from our #WaymoVia team during closed course testing 🤖🚚 🛫

Thank you to @RedCross for the work it's doing on the ground in Texas and beyond to keep people safe. We are proud to make a donation on behalf of @Waymo. If you are able to help, please visit http://www.redcross.org/donate/