Why I Ride with Waymo: Jean 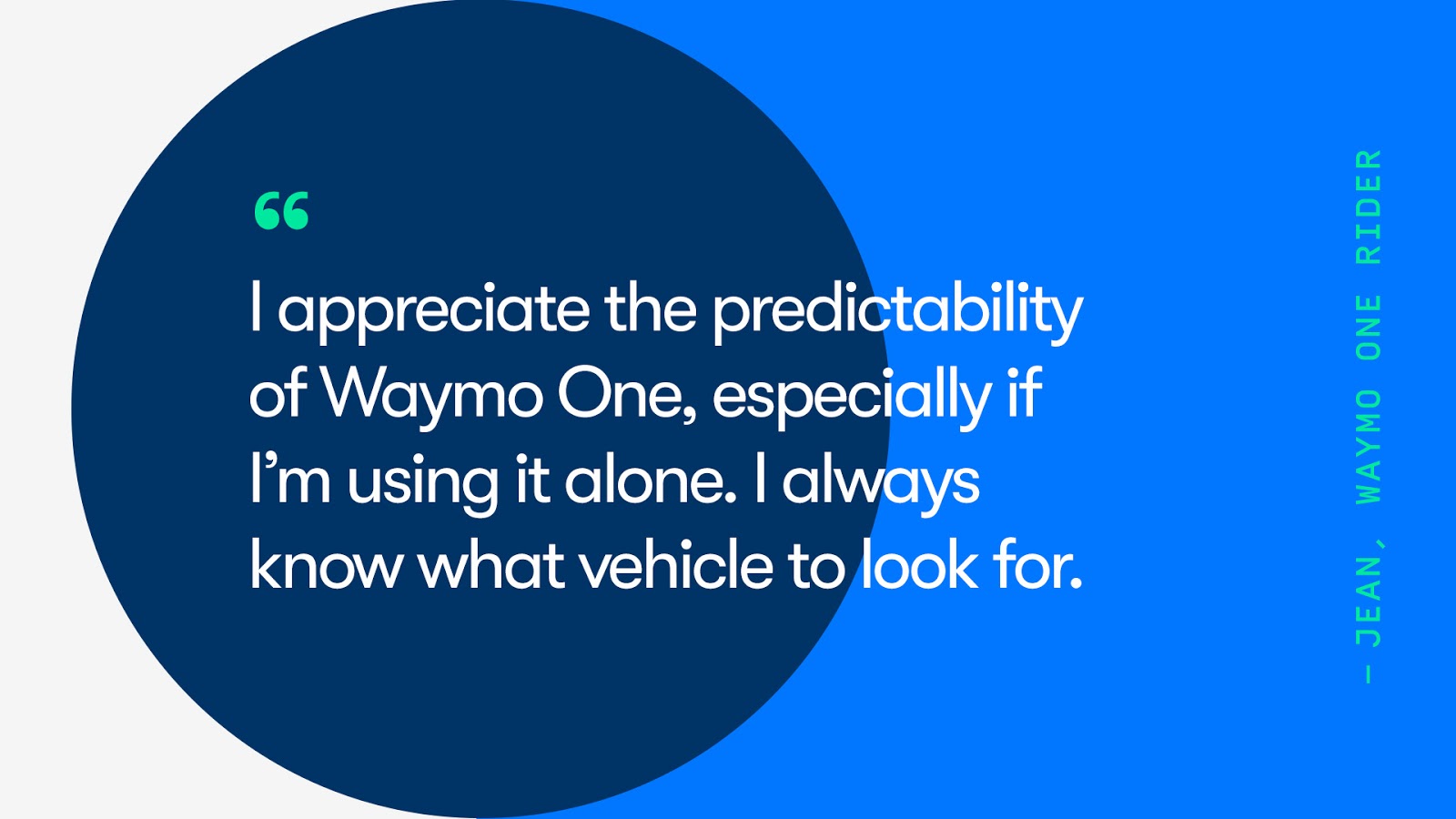 Editor’s Note: In this next “Why I Ride with Waymo” post we catch up with Jean. Although she often rides with Waymo with her husband, Bob, Waymo offers them different benefits. For example, Bob likes how Waymo One allows them to be a one car household, while Jean prefers the predictably of Waymo One, especially if she’s riding alone.

Tell us a little about yourself!
Hello, I’m Jean and I’m a part-time movie host at Alamo Drafthouse Cinema in Tempe, Arizona.

I appreciate the predictability of Waymo One, especially if I’m using it alone. I always know what vehicle to look for; I don’t recognize car makes and models very well, so it’s helpful that all Waymo cars are the same. I know exactly where it will pick me up and that it knows the route and won’t stare at its phone instead of the road throughout the ride. Lastly, if it picks me up at home, I don’t have to worry that it knows where I live and that I won’t be home for a few hours.

What was your first ride like? When did it start to feel like a normal part of your daily life?

Seeing what the “driver” sees and reviewing the route on the passenger screens was interesting. My first ride did feel a bit awkward because we were told not to speak to the trained driver in the driver’s seat, and I am compulsively chatty! Now Waymo is the only way we get to and from a night out. I must admit, I am more nervous now when I have to call another ride-hailing service, especially if I’m riding alone. I’ve gotten used to the safety of Waymo and don’t like having to use another service.

What’s your favorite thing to do while riding in a Waymo?

I like it when pedestrians and people in other cars are intrigued by seeing passengers in a Waymo. I like to wave and make faces at them! I also really enjoy how they’ve incorporated music into the cars now, too.

What is the most difficult part of driving for you, and how does Waymo handle it?

The other drivers! Not only does Waymo drive more safely, but it is utterly without emotion, so I can sit in the backseat and enjoy a nice detachment from the road rage game.

Do you give feedback after your rides, and have you seen tangible improvements in the service since you first started riding?

I mostly rate 5’s if everything generally goes just fine, partially because I don’t want to be focusing on my phone when I’ve reached my destination. I know my husband has sent several more specific suggestions and that they do get implemented. I feel confident that Waymo is listening to us and that our feedback doesn’t just go into a void.

In terms of improvements, I’ve noticed Waymo pinpoints situations it struggles with and works on them until it comes up with a solution for how to navigate it. For example, we live near a residential dead-end intersection with no stop signs. Initially, the Waymo would just sit there as it figured out what to do. Now it seems to slow down, look both ways, then move on. It learned!

Have you brought any friends or family along for a ride? What did they think?

Yes, almost all of my family members were excited to try it and were sort of stunned by how boring it actually is. I think they might have been expecting some kind of futuristic spacecraft, but it’s just a nice, safe ride in a clean, quiet car.

What do you think the potential is for self-driving cars?

I’d love to be able to use them for much longer rides so I could sleep or read on the way to visit my dad in Sun City, Arizona, or on the way home from a nice long hike. I wouldn’t even mind being stuck in rush hour if I could take a nap in the backseat! More broadly, it would certainly be a whole lot safer to have more self-driving cars and fewer unpredictable human drivers. The statistics for human-driven car accidents resulting in injury or death here in Arizona speak for themselves.