Canada was once looked at as one of music’s best kept secrets. But today it’s no secret at all that Canadian artists have completely reshaped our global soundtrack.

So many of these transcendent Canadian artists have found their audiences on YouTube. From Justin Bieber, Roxanne Bruneau and Shawn Mendes, to Alessia Cara and The Weeknd, the list goes on. We’re so proud to have connected these artists with the 2 billion monthly users we have on YouTube.

And we’re not done shining a spotlight on the brilliant talent in Canada. In fact, we’re just getting started.

Today, we’re launching Artist on the Rise in Canada. This new feature will live on our explore tab and showcase the promising future of a new emerging artist every week to our Canadian users. It’s also a companion feature to Creator on the Rise which launched in Canada in 2017. 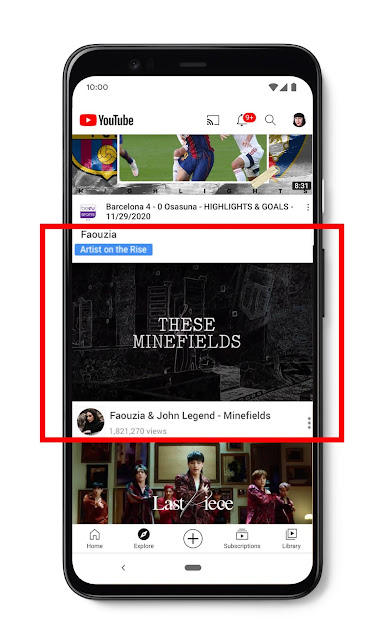 Our first featured artist is Faouzia, a compelling vocalist, songwriter and multi-instrumentalist from Carman, Manitoba. She has a unique sound that’s been described as cinematic pop with alternative and rhythmic elements. She continues to break through week after week, and is the perfect example of Canadian talent that’s taking the world by storm.

“In 2013, I started uploading my music to YouTube. Seven years and over a million subscribers later, I’ve seen how YouTube has been an important part of my growth journey as an artist, and connecting me with fans across the globe,” says Faouzia. “I’m honoured to be YouTube’s first Artist on the Rise in Canada, and look forward to continuing to share my sound and new music on the platform.”

Canada has always been a powerhouse of talent – from Alanis Morissette, Nickelback and Sum41 to Drake, Tate McRae and Faouzia. It’s critical for this talent to continue to be recognized and celebrated. We’re thirsty to discover the next generation of Canadian stars through Artist on the Rise on YouTube.