How Google supports the news industry

Many of you have been following developments around the News Media Bargaining Code and what it means for the Google services that you use and love. We’d like to take a step back and answer some fundamental questions we’ve heard about Google’s relationship with news and the news industry.

Just to be clear—Google does not object to the idea of an Australian Code to oversee relationships between news businesses and digital platforms. We have already made agreements to pay publishers for content through a licencing programand several Australian publishers have come on board. But what we don’t agree with is a law that’s totally unworkable from a product and business perspective. We know that many voices have called for changes to the current draft law.

Now, to address some key questions we’ve heard from you about Google and news:

Question #1: How does Google use news content?
Google doesn’t “use” news content—we link you to it, just like we link you to every other page on the web—think Wikipedia entries, personal blogs or business websites. We sort through hundreds of billions of webpages to find the most relevant, useful results in a fraction of a second, and present them in a way that helps you find what you’re looking for—and then we take you to the source of that information.

Some large publishers have inaccurately accused us of “stealing” news content, but how we connect people with news content, such as articles from the Herald Sun or the Sydney Morning Herald, is no different than the way Search connects you to your footy team’s home page, a website with your favourite recipes, or official Government websites. We sent more than 3 billion clicks and visitsto Australian news publishers in 2018 – for no charge – allowing these publishers to make money by showing their own ads, showing other articles or converting people into new paying subscribers—driving an estimated $218 million worth of value.

Question #2: Do news websites have a choice whether to appear or how to appear in search results?
Yes. Most websites want people to find their content in our Search results, but if a news site (or any other for that matter) doesn’t want to show upor wants to control what is shownon Google, they can choose to do so. They can do that whether their site is paywalled or free to view.

Question #3: Does Google value news content?
Yes. We recognise its role in educating and informing Australians, and in strengthening democracy. But it represents a very small proportion of the websites that people choose to visit from our search results. And it is not financially lucrative for us.

Google makes money from ads and we don’t run ads on Google News or the News Tab in Search.

Last year, only a very small percentage of Google Search queries were news-related and Google generated approximately AU$10 million in revenue—not profit—from clicks on ads against news-related queries in Australia. Most of our revenue comes from search queries for highly commercial topics, like when someone searches for ‘running shoes’ and then clicks on an ad. Businesses want their ads to appear against queries when a user is looking to buy a product or find a good deal. It’s these types of queries that lie at the heart of our Search ads business. 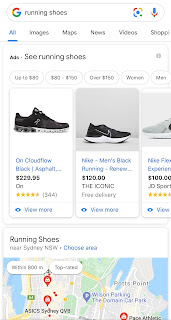 Question #4: Why do you say news queries represent a small proportion of search queries?
People come to Google to find many things, whether it’s ‘how to’ videos, recipes, sport scores, weather forecasts, outfit ideas, or home insurance. News is only a very small part of this content, and represents a tiny proportion of search queries. In fact, we looked at all the billions of searches that Australians typed into Google over the past year, and found that just over 1% of these were news-related. Examples of news-related queries in 2019 are “federal election” or “bushfire”. Queries like “best running shoes”, “burger restaurant near me”, “Dean Lewis new album”, “flu symptoms” and most everything else you can think of, are not.

For many years we’ve helped publishers make money by providing tools and technology that helps them sell advertising on their sites. Businesses which advertise with Google can choose to have their ads appear on news publishers’ sites with a few clicks. This removes a lot of the hard work for Australian publishers and gives them access to a huge range of new advertisers – often overseas – who work with Google. Of course we pass on the vast majority of money these advertisers pay us directly to Australian publishers.

More recently we’ve created technology to help publishers drive revenue through subscriptions. In addition, we have developed the Google News Initiative, designed to help journalism adapt to the digital age. In Australia, we have partnered with the Walkley Foundation to deliver free training for up to 5,000 journalists and students in Australia and New Zealand. Nine Australian media organisations have received our Innovation Challenge and YouTube innovation funding. We also provide emergency funding to publishers impacted by COVID-19.

And importantly, in July, we announced a series of new deals to pay to license content for a new news product going live in the next couple of months.

Question #6: Hasn’t Google taken news publishers’ revenue?
Actually, an analysis recently conducted for Google by the economists at AlphaBeta, shows that the loss of newspaper revenue resulted primarily from the loss of classified ads to online classifieds businesses such as Domain, Realestate.com.au, Carsales and Seek. Between 2002 and 2018, newspaper revenue fell from $4.4 billion to $3.0 billion. Of that decline, 92% was from the loss of classified ads, and most of these classified revenues went to specialist online providers that target niches such as job advertisements, second-hand goods, or real estate listings. Almost none went to Google