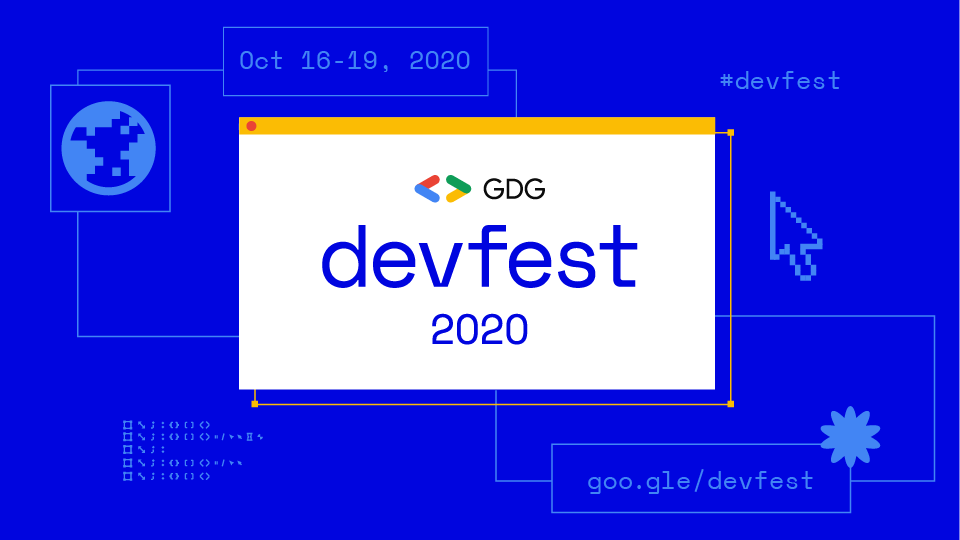 On October 16-18, thousands of developers from all over the world are coming together for DevFest 2020, the largest virtual weekend of community-led learning on Google technologies.

As people around the world continue to adapt to spending more time at home, developers yearn for community now more than ever. In years past, DevFest was a series of in-person events over a season. For 2020, the community is coming together in a whole new way – virtually – over one weekend to keep developers connected when they may want it the most.

The magic of DevFest comes from the people who organize and speak at the events – developers with various backgrounds and skill levels, all with their own unique perspectives. In different parts of the world, you can find a DevFest session in many local languages. DevFest speakers are made up of various types of technologists, including kid developers , self-taught programmers from rural areas , and CEOs and CTOs of startups. DevFest also features a wide range of speakers from Google, Women Techmakers, Google Developer Experts, and more. Together, these friendly faces, with many different perspectives, create a unique and rich developer conference.

The sessions and their mission

Hosted by Google Developer Groups, this year’s sessions include technical talks and workshops from the community, and a keynote from Google Developers. Through these events, developers will learn how Google technologies help them develop, learn, and build together.

At our core, Google Developers believes community-led developer events like these are an integral part of the advancement of technology in the world.

For this reason, Google Developers supports the community-led efforts of Google Developer Groups and their annual tentpole event, DevFest. Google provides esteemed speakers from the company and custom technical content produced by developers at Google. The impact of DevFest is really driven by the grassroots, passionate GDG community organizers who volunteer their time. Google Developers is proud to support them.

During DevFest 2019, 138,000+ developers participated across 500+ DevFests in 100 countries. While 2020 is a very different year for events around the world, GDG chapters are galvanizing their communities to come together virtually for this global moment. The excitement for DevFest continues as more people seek new opportunities to meet and collaborate with like-minded, community-oriented developers in our local towns and regions.

Join the conversation on social media with #DevFest.

Still curious? Check out these popular talks from DevFest 2019 events around the world…

🙌 Thank you for joining us at #TFEverywhere2021 North America, we hope you enjoyed it!

Don’t worry if you missed this one because #TensorFlow Everywhere is still happening around the world.

Find an event near you → http://goo.gle/37PqspG

Don’t miss out on the latest updates from Google and #GDEs starting today at 9am PT!

🏎️💨 Stay up to speed with this week’s #DevShow updates!

We’ve got the latest news on:

Get excited to learn from 8 Machine Learning #GDEs on their projects and experience starting at 9AM PST today.

💰🔌 Are you a developer integrating payments?

Join the @GooglePayDevs community and get:

🏆 Go from #TensorFlow Zero to Hero.

Reserve your spot at #TFEverywhere2021 North America to hear from @lmoroney on Feb 26 and 27!

Migrating or modernizing your mainframe workloads is complex and challenging. Learn how to remedy certain antipatterns using technology offerings from Google.

We've got a big surprise!

We're one week away from #FlutterEngage on March 3rd. Are you ready for Flutter, too?

👋🥳 Let’s give a warm welcome to @GooglePayDevs!

👋Welcome to the @GooglePayDevs channel!

Are you a developer integrating payment solutions?

👉This is a place to stay updated on all things digital payments related.

Watch this quick recap of what we covered and more → https://goo.gle/3sm2p9Q